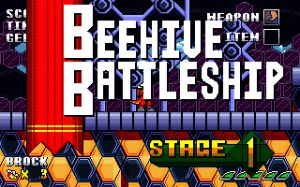 Check out the stage profile for the second level in Brock Crocodile, the Beehive Battleship! This was so far the hardest stage I had to design from both a visual and gameplay standpoint but I hope it will be worth it as long as the players enjoy it. The level is just as fast paced as the previous stage but with two new stage specific gimmicks and new baddies to deal with. If you’re interested in finding out a bit more you can check the profile in the stages section, more screenshots to be added in the future!

Outside of that you may have noticed that we have changed our twitter profile pic and the featured image on this article to a new image of Brock. I’m happy to say we’ve got the perfect dialogue box image down for him and I think it’s a massive improvement over the last one we had, do you agree? In future look out for the featured image as we’ll be using it to show off the dialogue image for the characters in the game. Let us know about your thoughts on www.twitter.com/brockcrocodile about the stage or anything else!