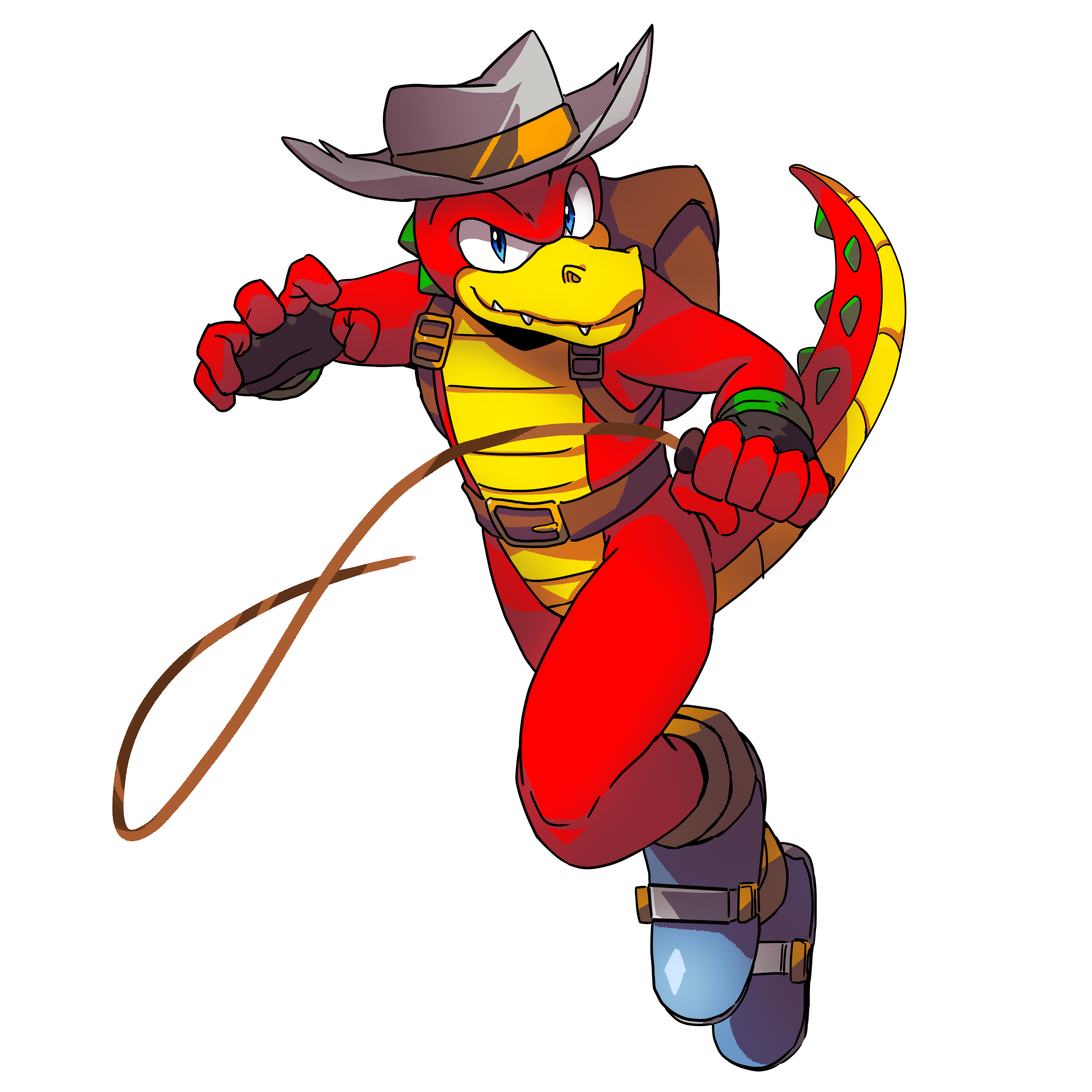 An adventurer at heart, Brock loves to explore the world and learn all there is to it. But under the guise of a hapless archeologist, he has a determination that only friends know of and takes on the bad guys, upholding justice where it may be broken.

The oldest son of Walter and Mary Crocodile, Brock's love for exploration is second only to his friends. Through out all his adventures he is aided by them and his willingness to help those in distress knows no bounds. Kindness and understanding are key components of his personality and he keeps his true abilities secret to all but friends.

His adventure begins when he ventures into the Gazadiaz Ruins to meet up with fellow archeologists digging up the ancient artifact of the ruins. But he finds the relic stolen and begins an adventure that will take him across the country and confront old rivals and the mastermind behind it all... Wize Dark. 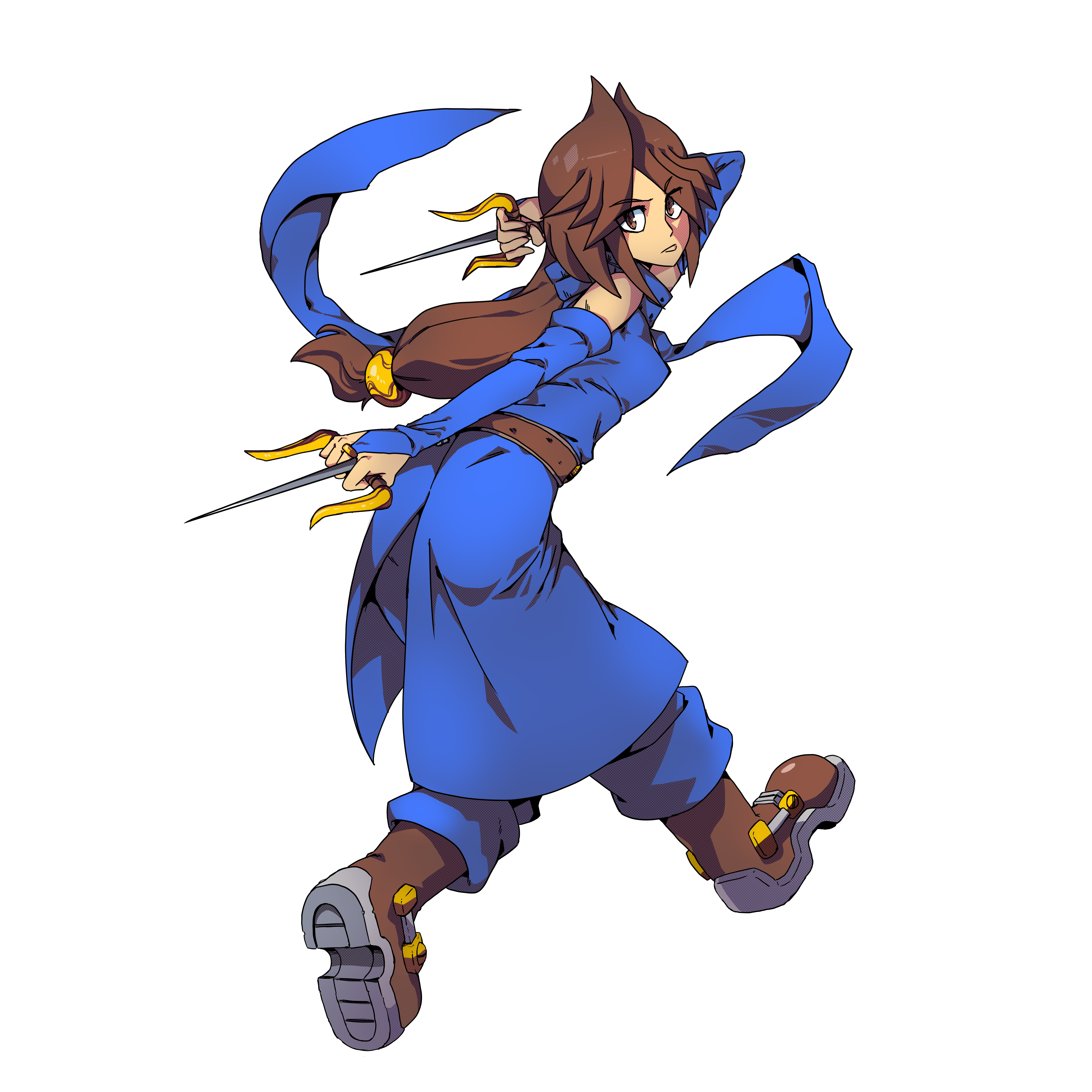 She's a good cook as she is a fighter, Xia-Yee is one of Brock's oldest and strongest friends. Much more serious than Brock with a temper to boot, the two often find themselves side by side against the baddies that threaten Crocodillian Island.

Living her lifelong dream of being a chef, Xia-Yee loves cooking up new recipes. Her expertise with the cook book is only matched by her knowledge in combat, making her feared by all the shady characters that inhabit the island. Strong willed and duty bound, her kindness is as strong as her rage towards those who harm the defenceless.

Dragged into the chaos that begins after Brock foils the plans of the Turtle Punks at the Gazadiaz Ruins, she's determined to help Brock fight off the baddies who threaten the peace of the lands. 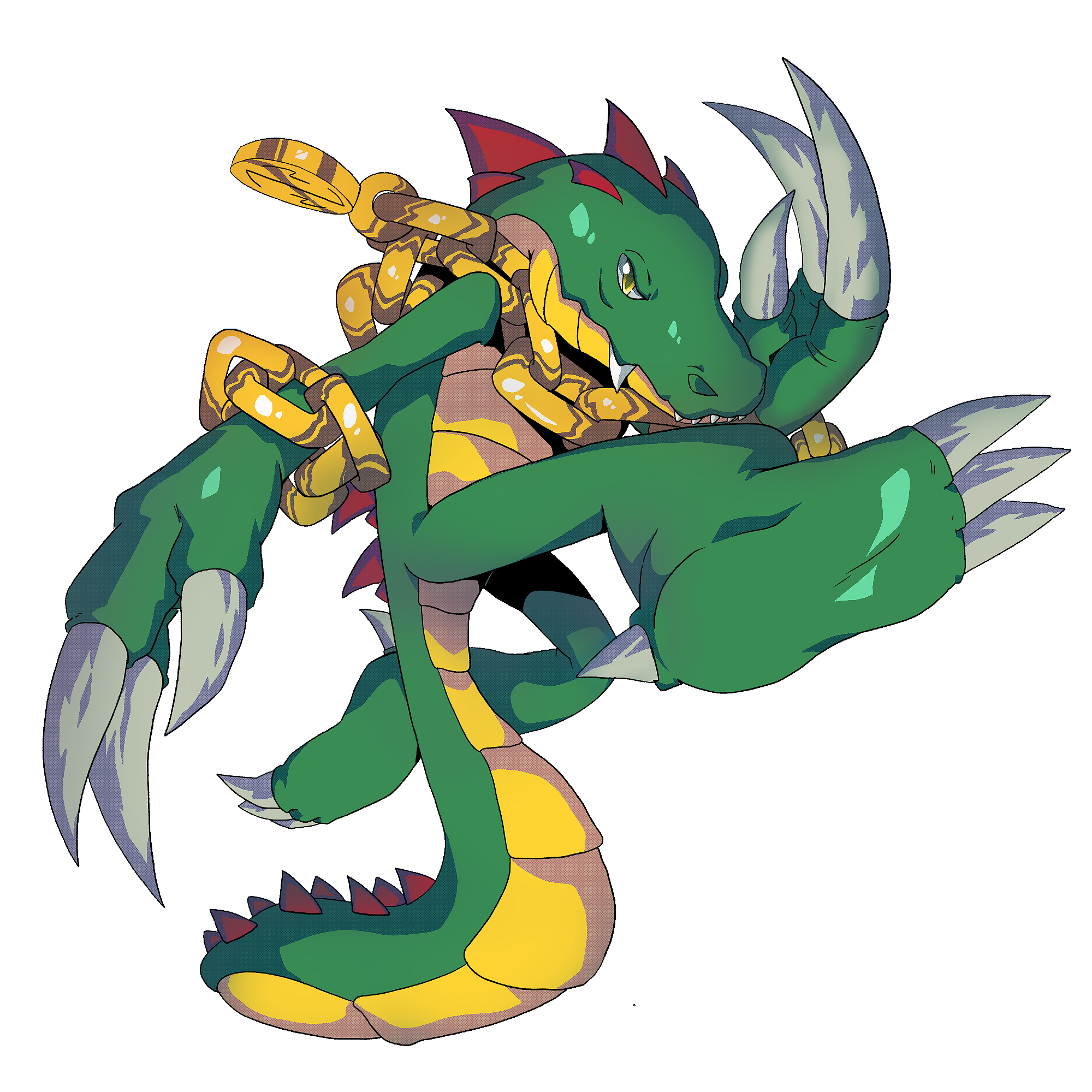 Hailing from the kingdom of flying islands, Rex is the pirate captain of the Lazareth and helps out Brock and friends... When he can be bothered that is! His laid back nature has made him an unrealiable ally but never less, when the chips are down he's sure to provide back up.

Rex and his crew were once famed as the up and coming stars of the Tizenyklsaur army but one fateful mission saw the group disobey the chain of command and decided to release them from the shackles of military authority. Now they sail the skies and act as a modern Robin Hood, stealing from shady organisations and distributing it to the needy.

Despite trying to enjoy some quiet time, Rex is contacted to help Brock and co to help with the mess on Crocodillian Island. The million dollar question is, has he checked his text messages? 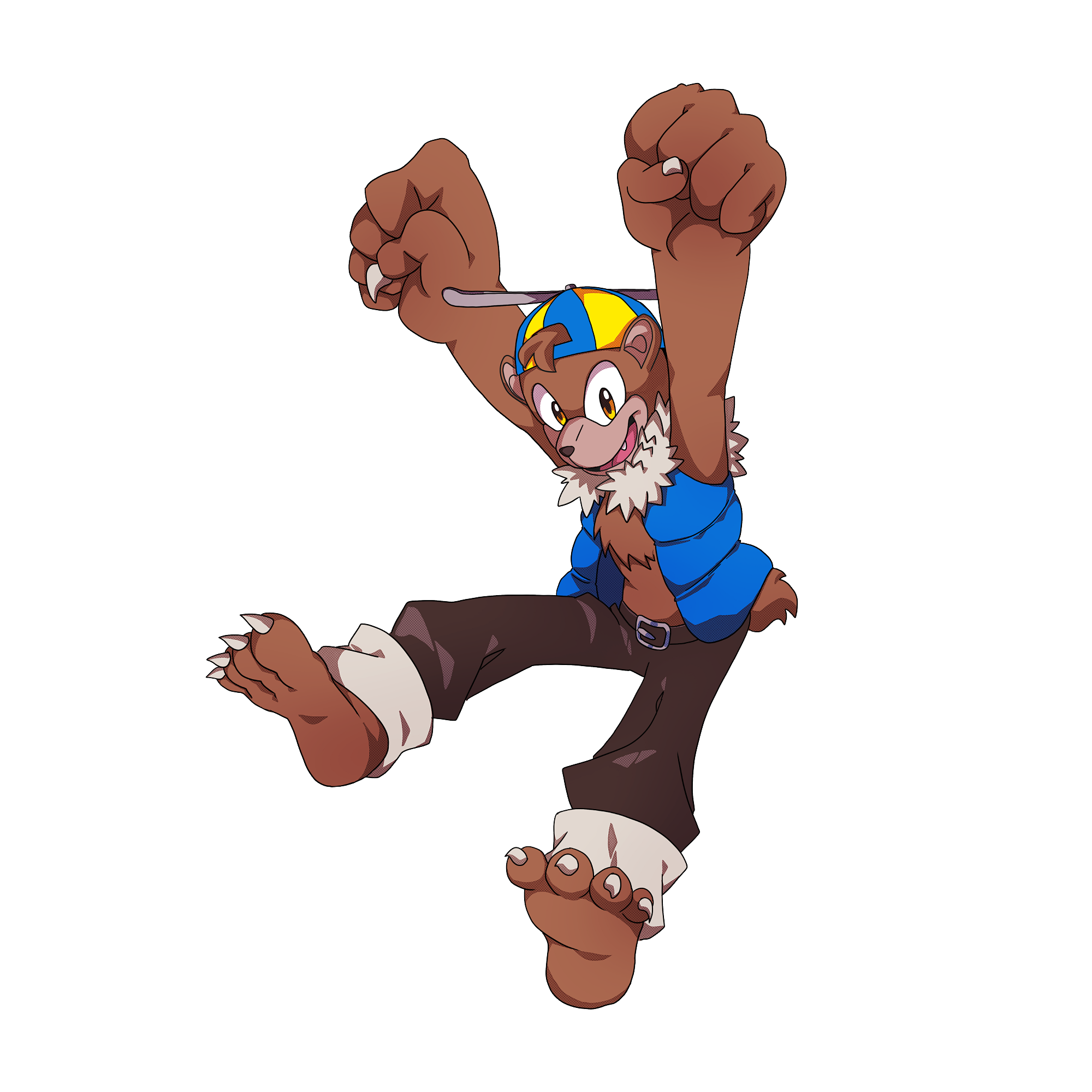 A young grizzly cub who looks up to both Brock and Angelika, Berzo is a bit of a cheeky lad who ends up helping Angelika in her latest technological breakthroughs. Failing that, the two end up causing a few pranks instead and are known to be quite the destructive pair.

A firm believer in peace and justice, he bases himself off of superheroes and wants to help Brock out anyway he can. 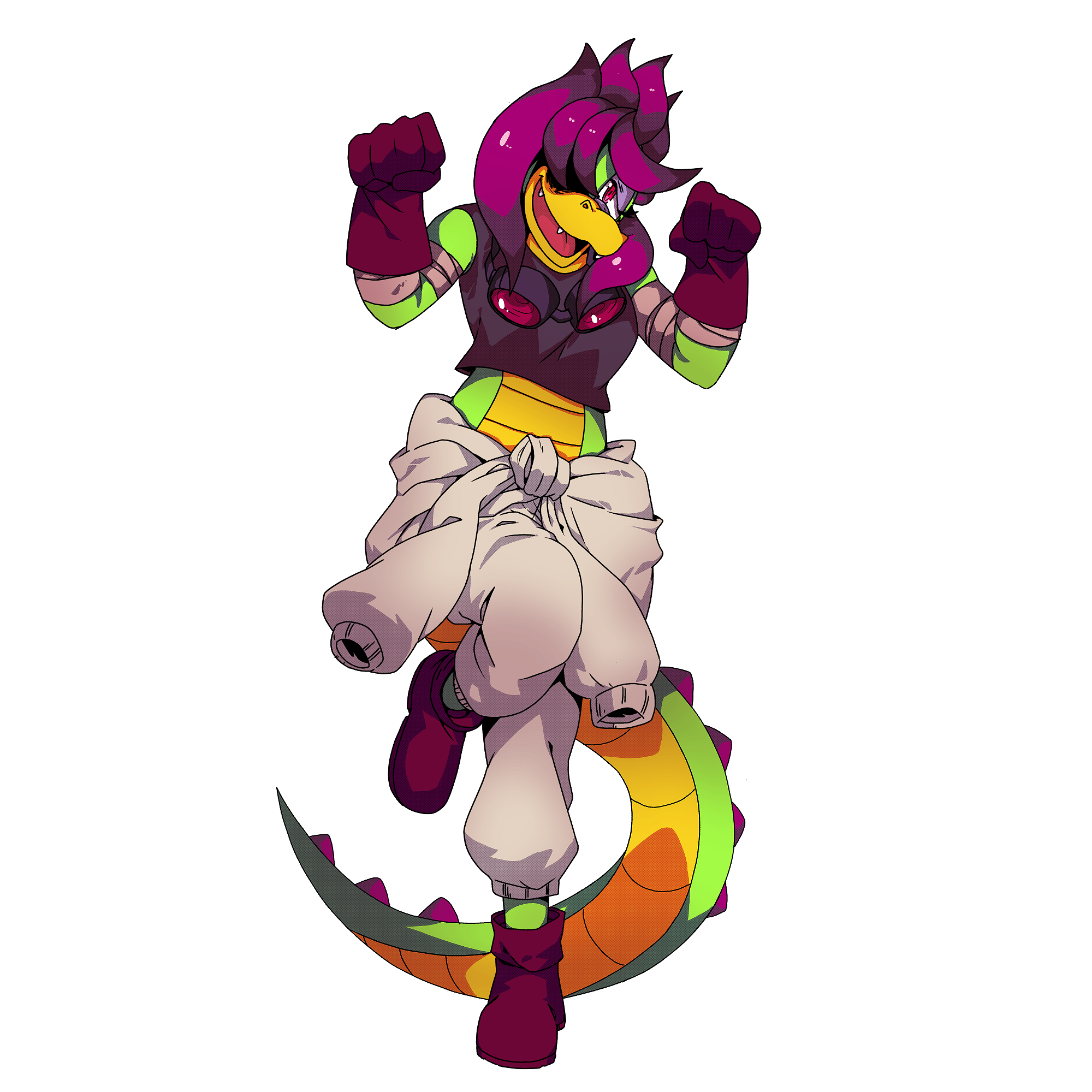 Brock's sister and the youngest child of the Crocodile family, Angelika has been spoilt by their parents as the baby of the family. Showing a brillance in science from a young age, Angelika channeled it all into coming up with weird contraptions and machines and now runs a workshop in Crocoh Lake.

When she's not bothering her older brother about using his garage for dangerous experiments, she helps by making weapons that Brock uses to take down the bad guys. She's a bit of an eccentric but kind hearted soul who's always willing to help, it just so happens half of those inventions of her's tend to blow up 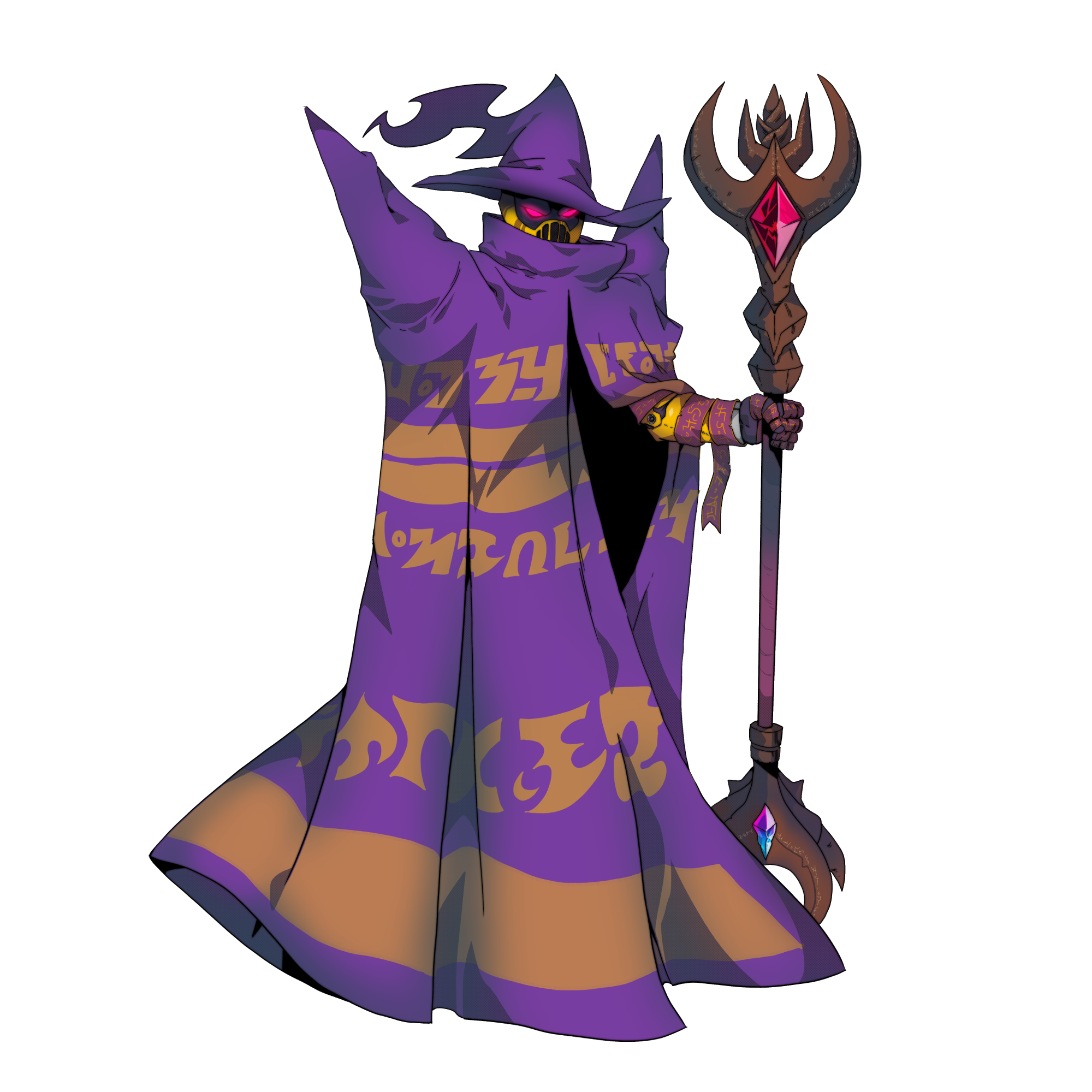 TThe boss of the Fearsome Four, a mysterious man of unknown origin who seems to be searching for the artefact excavated in the ruins. Whatever Wize's end goal is for the item can only spell disaster for the people and his arrival has seen a sharp uptake in crime. 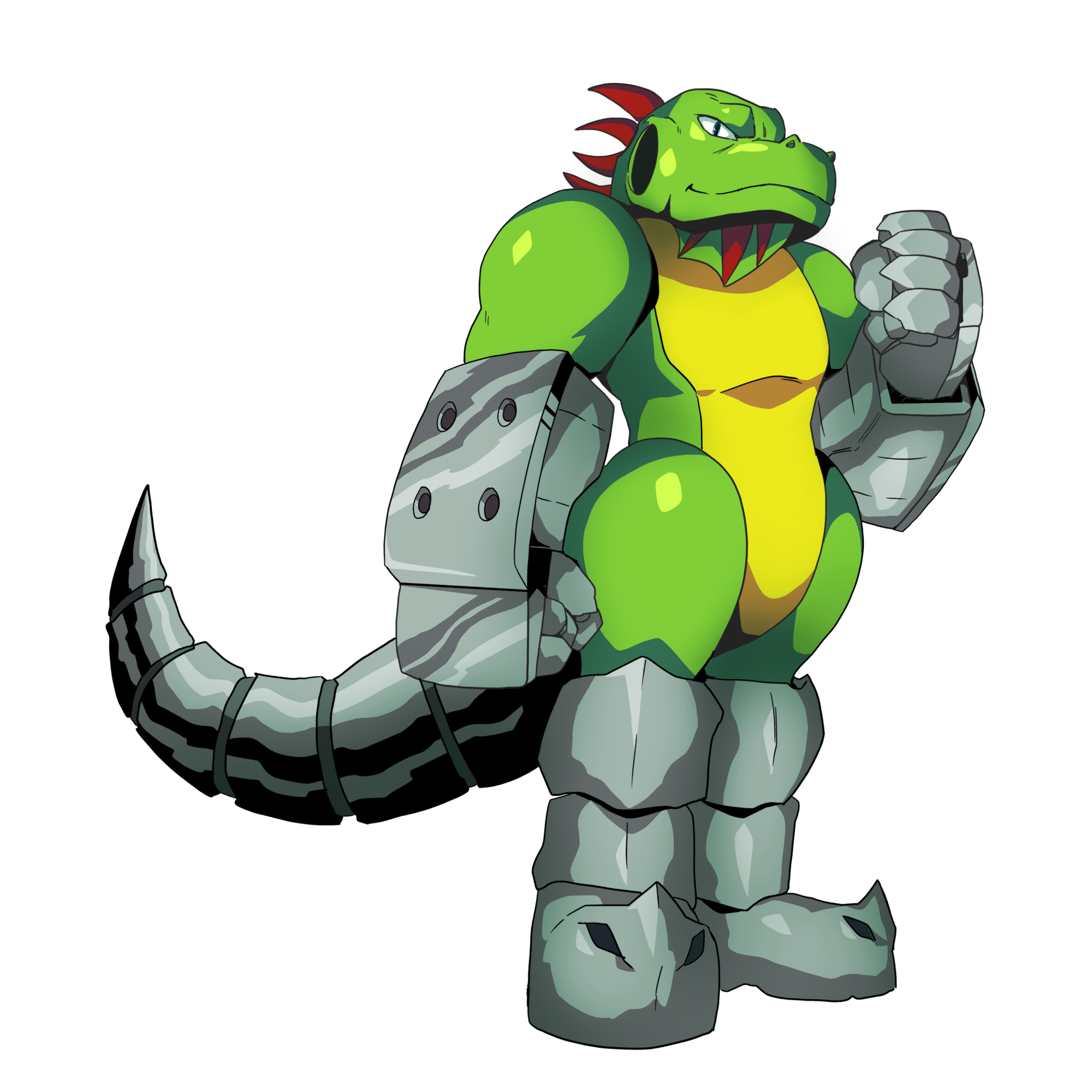 The leader of the Fearsome Four and Wize's right hand man, Eguanodon is the crown prince of the Iguanian Kingdom and 9th in line from the throne. Facing no hardship in life and very little challenge thanks to his gifted physical ability and intelligence, Eguanodon has taken up being a criminal mastermind to spice up his day to day routine.

Thanks to his royal lineage offering him diplomatic immunity, Eguanodon is able to operate without much respite for his actions but he is never in it for his own gain, rather he just wants some stimulus in his life and taking on the role of the bad guy seems to be the most challenging role he can take on.

Him and Brock also seem to share a longstanding rivalry with Eguanodon currently leading with 52 victories to Brock's 51. Will Brock be able to even the count? 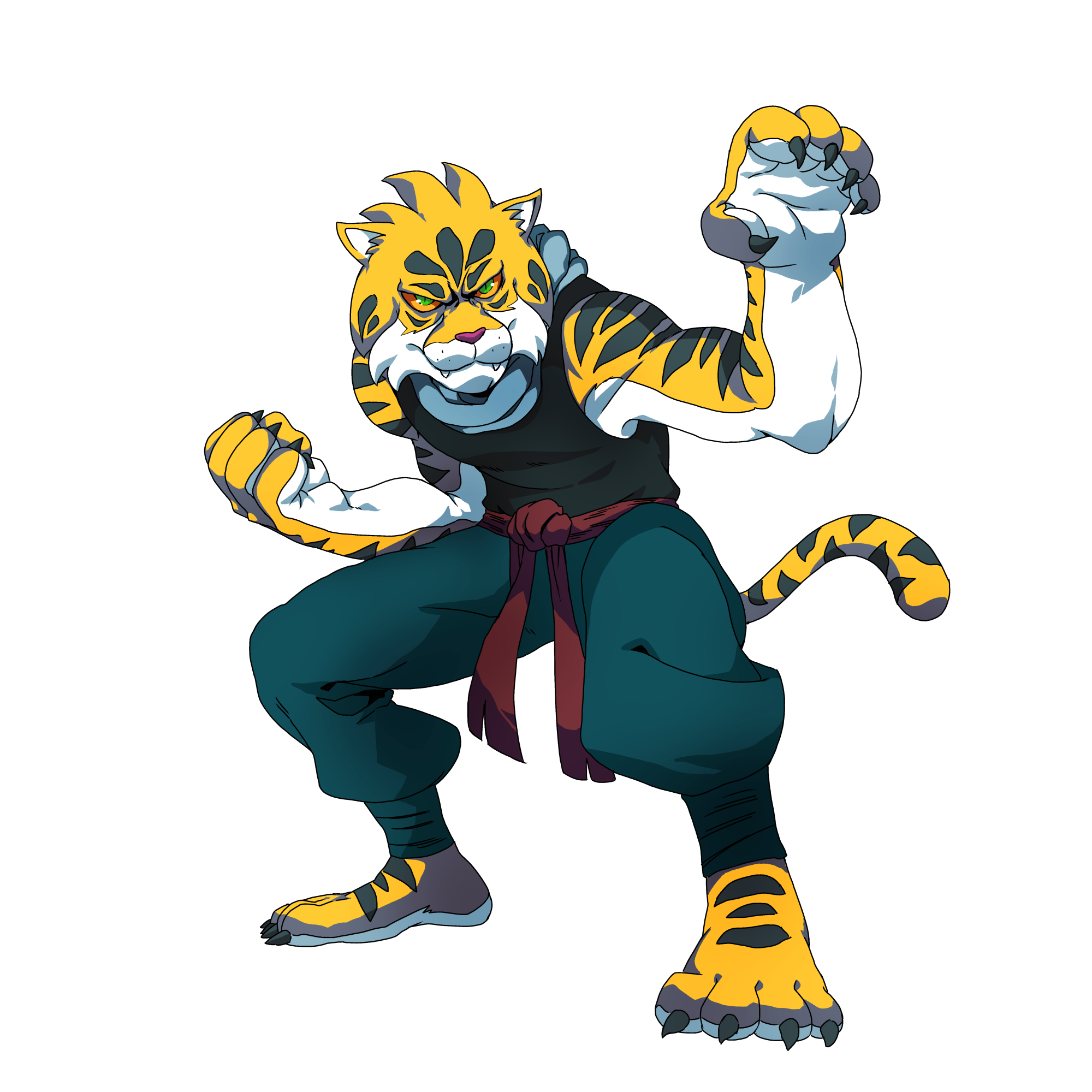 A martial arts master and fierce fighter in his own right, Tijin is looking to crush every dojo in the world and prove his fighting style as the greatest.

Hailing from the far East and having established his own dojo with hundreds of skilled fighters following him, Tijin is proud fighter with an air of arrogance about him. Despite this, he still has a sense of honour and respects those who can defeat him in battle.

He is brought to Crocodilian Island by Eguanodon to provide the skilled muscle required for Wize's operation. 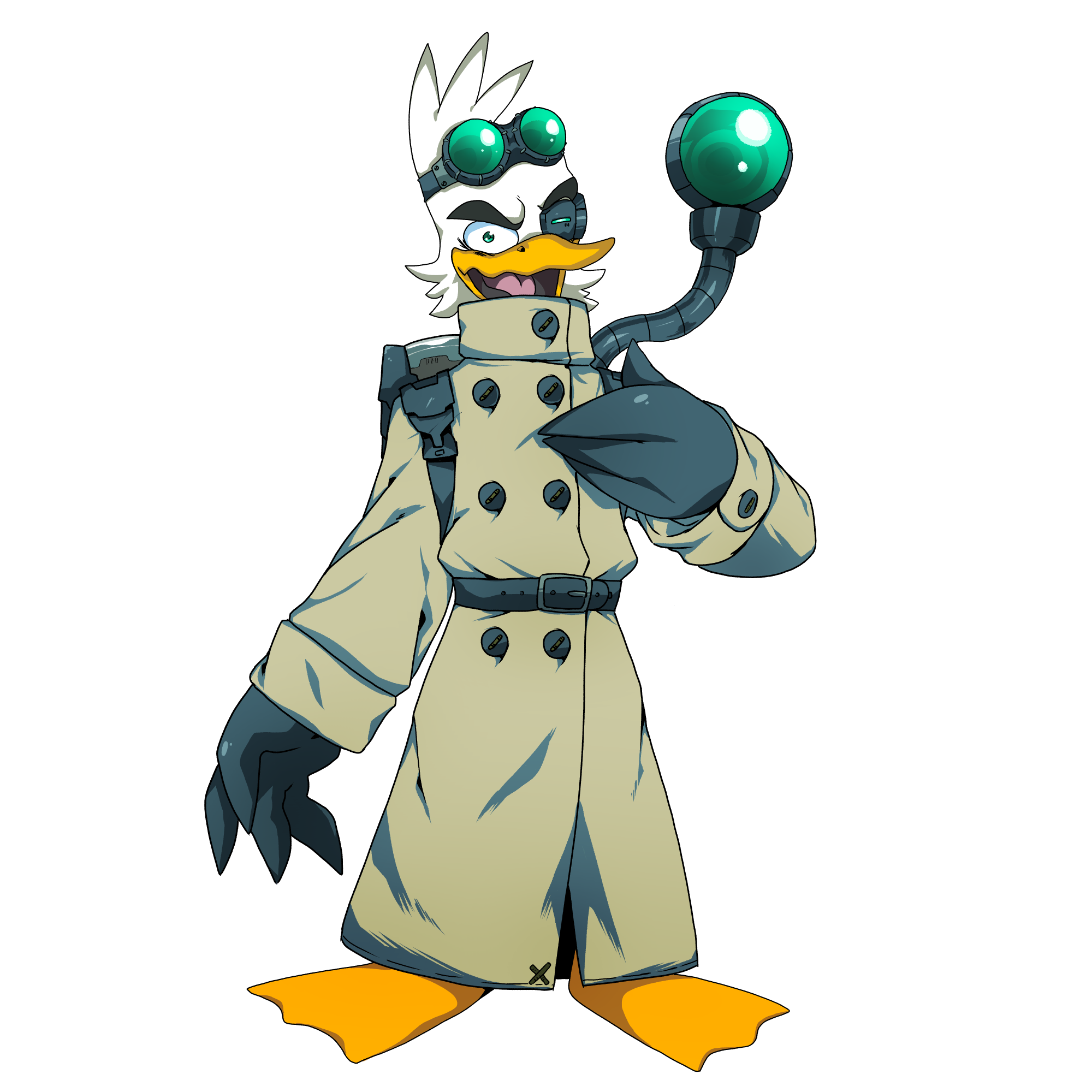 One of the greatest minds on the world, Duckworth has unfortunately squandered all that in his allure of scientific breakthrough. Proving theories and ideas don't come cheap!

Turning to a life of crime to fulfil his scientific ambitions, Duckworth provides the brains for Wize's plot and comes up all types of nefarious machines to stop our hero in his tracks. Ego mad and full himself with a taste for theatrics, Duckworth's undoing is his overwhelming self-confidence. 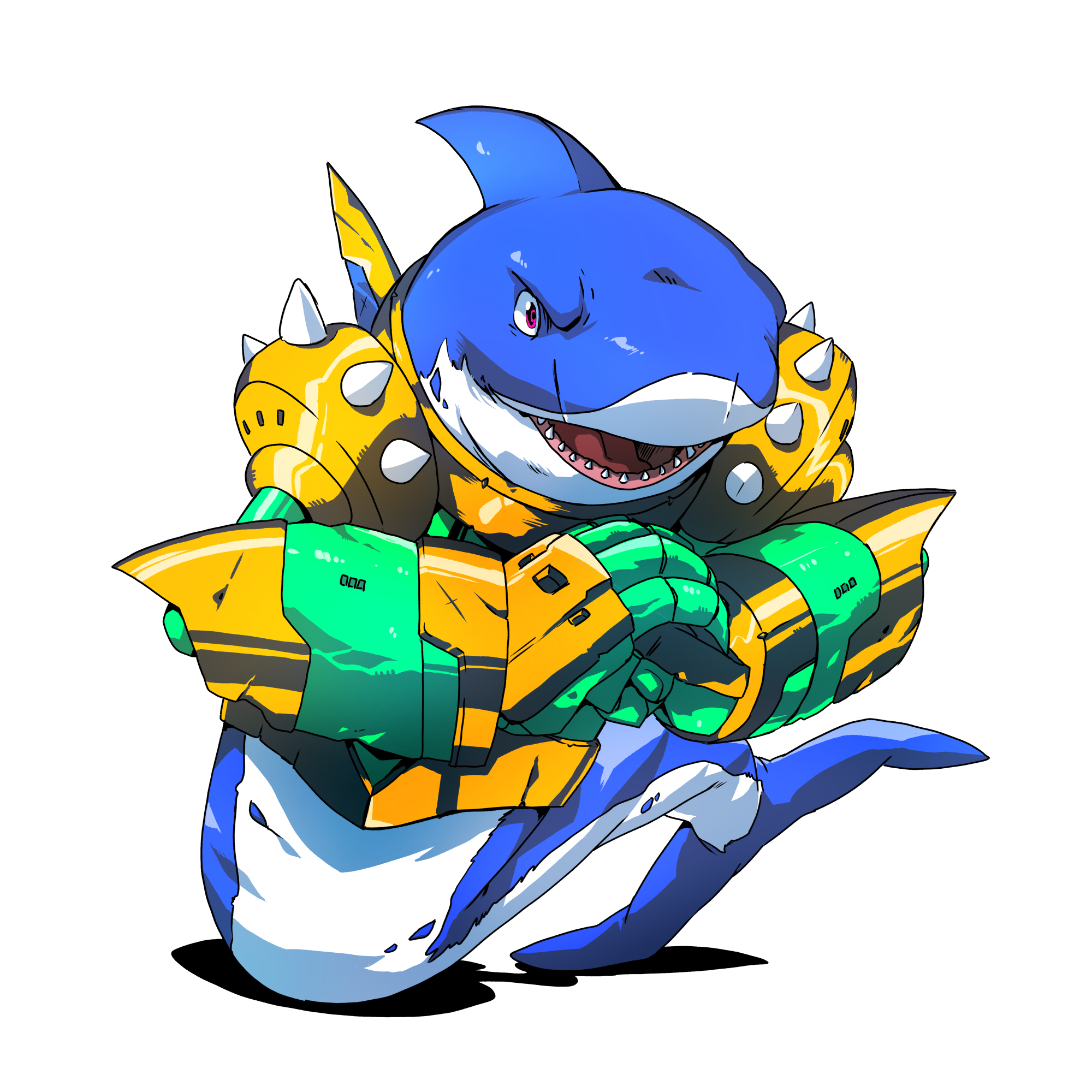 A merc for hire who's helping to provide Wize the numbers for his forces, Sharko isn't a quick thinker but his sheer fighting ability usually helps him to get the job done.

Despite his appearance, Sharko is a mellow guy who's only taking on jobs to help provide for his family and whilst Wize might be the bad guy to Sharko "He isn't a bad guy to ME."