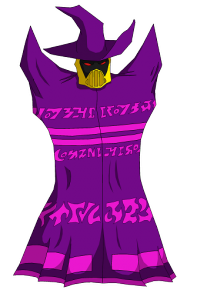 This week’s update features a character profile for the main antagonist at the heart of the troubles in Brock Crocodile, the mysterious Wize Dark! The player will be confronting the villains forces through out the game as he attempts to carry out his secret plans. Not much is known about Wize but whatever he is upto is no good for the people of Crocodillian Island and it’s upto Brock and friends to put an end to his schemes.

You can also see the the mugshot that will accompany Wize’s dialogue in game, to get a rough idea what the dialogue system would look like during cutscenes/NPC interactions, you can check this tweet out. As always if you want to have a chat with us you can contact us at www.twitter.com/brockcrocodile