We’ve been showing off this stage on our Twitter account for sometime now but now is the time to officially announce the third stage, Museum Mayhem! 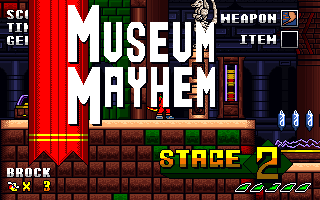 After protecting an ancient artifact discovered in the Gazadiaz Ruins and stopping the attempt to steal it in Beehive Battleship, Brock finds there’s some mysterious goings on in the museum that threaten the artifacts safety again. Spirits of warriors passed long ago, mummies and living demonic skeletons wander the halls of the museum… But is everything as it seems?

So far in the development of Brock Crocodile I definitely had the most fun in designing this stage. It also, combined between both stages, the smallest level so far in the game but don’t let that make you think it’s the shortest. Completing either stage should take you more than 2 minutes even knowing the most effective route to the goal. While Gazadiaz Ruins only had baddies standing in your way and the Beehive Battleship need you to wait for hoops to drag you to the next location, Museum Mayhem has a few different kind of obstacles. 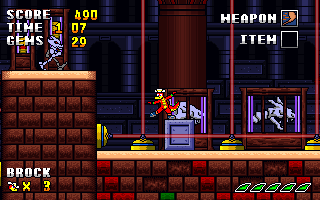 Firstly the biggest hindrance to players is going to be the secruity system of the museum. Through out the stage the players will find laser beams that are meant to discourage any thief who dares enter (Why a museum has this system we may never know… ) The second and third gimmick are mostly safe, a moveable block and crates blocking your path. One just requires a push from the player whilst the other needs them to find the levy hook attached to the crate to move it upwards. But be careful with the crates, if you want too long under it it’ll come and crush poor Brock (No instant death here but a 1HP damage to our scaly friend.)

I also had the most fun in designing the baddies for this stage but that’s a tale for another update. Until then head over to the stages section and read up a bit on Museum Mayhem. We’ve done some basic changes to our website now linking our Twitter, Facebook, Youtube and Google+ pages on the header and you’ll find you can share or retweet this entry at the article’s title. Hope you’ve had fun reading this and be sure to look out for more future Brock Crocodile content!