I must admit I’ve come a long way since the original trailer. With this one I had a completely original track made by our music guy, Steve Lakawicz, after I had completed the base trailer. Upon viewing it Steve analysed and produced his own song and timed it with the trailer itself after which I went back and made sure everything timed together well. I must say I think Steve has outdone himself again with another brilliant tune and having listened to his other tracks, I can tell you you are in for a treat with the soundtrack! 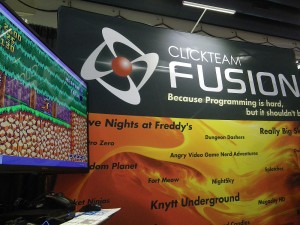 Brock also appeared at GDC last week thanks to the nice folks at Clickteam.com

The contents of the trailer show off first video footage for two new stages, City Lockdown and Breakout Prison, as well as Brock’s first confrontation with his rival Eguanodon the Third and the mysterious Wize Dark. You’ll also get to see two new bosses in action with this one, the Asguardian Golem and Theodore Thunderbolt. Not only that but improvements made to both Museum Mayhem and Beehive Battleship. Whilst Museum Mayhem is mostly just a change in some background scenery, Beehive Battleship is the one that has underwent the most transformation. 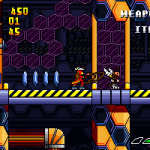 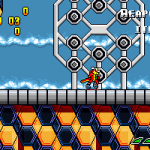 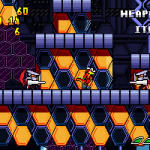 First of all I’ve replaced the paladins with a completely new sprite instead of a lazy recolour of the archer. Second the foreground scenery has gone from grey floors to a light blue floor and purple beehive walls throughout as well as a transportation pipe. Finally the biggest change happened to be the background itself, prior to this there was nothing but clouds, now I’ve sealed the level in it’s own little interior with openings showing off the clouds. With this I hope the level now feels like a proper airship Brock is adventuring through rather than a highway in the cloud.

I’d like to introduce two new team members I hired between the end of last year and the beginning of this year. Matthew Weekes has been a level artist and helped produce the level art for the City Lockdown and Breakout Prison from concept arts I sent to him. I think we can agree seeing his work on the latest trailer his been doing a smashing job so far! Second we have Molly Heady-Carroll who has been helping animate characters from concept pieces I’ve designed, she’ll also be helping colouring in character illustrations after I provide the line work, you can have a look at some of them down below! 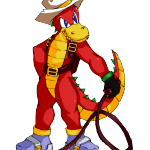 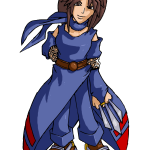 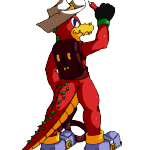 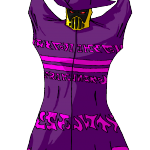 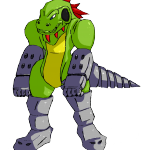 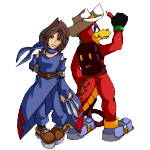 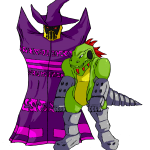 That wraps up this week’s article, thanks for reading and please spread the word of our latest trailer and Greenlight campaign. Until next time folks!