If you’ve been following our Twitter account then you’ll know that work has began on implementing the baddies for Volcanic Meltdown. As this level is set in a mechanical base, I’ve gone with a choice of only robotic enemies in this stage that a bit tougher than the previous grunts Brock has faced.

First of all we introduce Skullface. This orb shaped walking bomb with a skull for a face leisurely walks around the stage however once he locks onto Brock he’ll frantically run towards him and if he misses, players have to be careful they avoid the sparks he sends out after he explodes!

Mecha-Duck is another mechanical menace (Complete with a glitch I need to resolve!) Brock has to take down and slightly tougher too. Whilst Skullface only had 2HP, Mecha-Duck has 3HP meaning on stomping on him will give the player an instant kill. Just like Skullface, he’ll walk around the stage in his set area but he has a longer line of sight and worse still a more deadly attack! Players might remember the flamethrower from the fifth level, Breakout Prison, makes it’s return here equipped as the weapon of choice by Mecha-Duck. What makes him tougher once he activates his flamethrower is bullets are ineffective against him and Brock’s whip doesn’t have enough range, a well timed jump is the only way to rid Brock of this obstacle. 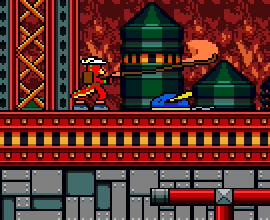 The final baddie is Squeek-bot, a small mice like creature that’ll run from one end of an area to the other. It’s one of the weakest baddies in the game coming at a poultry 1HP. However the nuisance comes from its smaller frame, letting it able to dodge Brock’s projectile weapons or extended whip on a flat surface.

And that wraps up another one of these progress updates. Hope you enjoyed reading it and we’ll continue to keep you updated on Brock Crocodile and a happy Eid Mubarak to everyone celebrating the festivities! Until next time folks!