Let’s have a chat… Development Blog

Hello everyone! It’s been a while since our last development update but fear not, we’ve up another blog to show how the development of Brock Crocodile is progressing. Today we’ll talk about a minor, yet also important improvement that’s been done to Brock Crocodile, the pre-boss fight cutscene.

Now whilst not an essential part of the game, I decided early on that there would be plenty of chatter in the game. The general idea behind it was the give players a feel of the characters and their personality and if in future there is more dialogue in future games, the process isn’t as jarring as going from no talking to every character talking. It also helps to expand the world of Brock Crocodile and more importantly for players who like a neat story to their package, have something to motivate them forwards.

Credit for the coding of the dialogue engine goes to a tutorial provided by Chris Burrows using the text blitter extension for Multimedia Fusion. After obtaining the basic game logic, the next up was how to active it or disregard it. The design process was as follow; 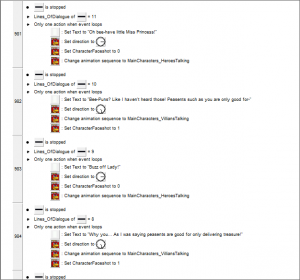 Following that it came down to two more extra features that had to be implemented. First of all if the player died at the boss, the game should disregard the dialogue box and head straight for the boss battle. The second feature would be if the player wanted to actively skip the dialogue and this was done by giving the player to hold the C key (So anyone who accidentally pressed C doesn’t miss the scene) to skip the cutscene. I’m hoping players can enjoy these scenes that would be filled with light hearted humour and interaction with other characters but those who want to go straight down to gameplay can do so too.

Thanks for reading, that wraps up this update! We still have some more exciting news to announce soon all coming in the future so keep on the look out for future Brock Crocodile news. Until next time folks!