Yes those wondering where we’ve gone, worry not, the work on Brock Crocodile has picked up once more and everyone on the team is wishing all a Merry Christmas and a Happy New Year! As we head in 2016, I’ve started working on one of the most important art pieces for the game, the main map menu. 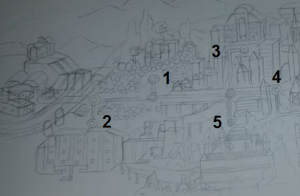 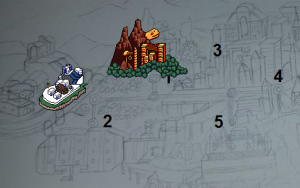 Those who have been following our twitter feed would know that I’ve been working on the map screen for Brock Crocodile. It’s been hard trying to come up with a style I felt “right” but after checking a few world maps, I opted out of the usual top down you find in old school RPGs and instead went to focus on a sort of more natural look, as if you’re overlooking it from a mountain in the distance (With stylized mini-map icons of course)

The biggest problem that I’m finding so far is trying to keep everything in a relatively similar size, as you can see from the above image, the hub town is a good decent size but then the first stage icon is absolutely massive in comparison. Obviously some stuff that I’ll need to fix up once the full map is complete!

This is going to be the final update for the year but rest assured that there is going to be more Brock Crocodile in the future, until then, have a great Christmas and Happy New Year everyone!