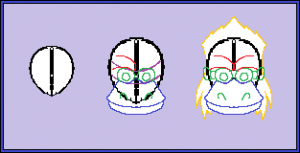 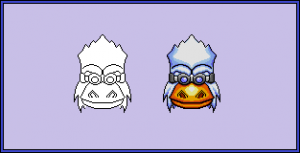 Hello all! Today we’ll be looking a little bit on one of the bigger sprites in the game, the showdown with the mad scientist Andre Duckworth. The first thing when it came to designing this boss fight was making sure the dimensions were just right so that players wouldn’t be able to spam Brock’s whip attack on his weakpoint, his head. As he’s a fairly large sprite I had to have a rough idea how high up the player could jump without using the help of his hands to lift them up into an attacking position. It’s safe to say I had to correct the size of his head from the original to make sure it was big enough to still seem like a giant boss but small enough to fit in the screen and not provide the player easy opportunity to spam an attack on him.

Next up came designing the body. Unlike the head, the size for the body didn’t matter from a gameplay standpoint but at the same time, I had to avoid a situation where the boss would feel like he was related to a Gomba from Super Mario Bros: The Movie. Although I’m still not sold on the spiked shoulder/arm joints, it does help give the boss a more imposing figure, though this might be something I change later on.

Finally combining the two we start to get a better picture of what the boss will look like, a towering monstrosity wanting to destroy our red scaled hero. Just for a comparison sake, Brock stands at around 30 pixels tall, whilst Duckworth here stands at a whooping 180 pixels (With the height of the native resolution for the game being 200) there’s still some stuff to work out, but overall I’m happy with the look of this boss so far. Next up would be designing his arms and their movements. That concludes this update, hope you enjoyed reading it!