Happy New Year! Time to get back into the groove for 2018!

Hello everyone! It’s been over a year since the last update on the blog so I thought it was time to hit another one. Those of you who have been keeping upto date with our Twitter shenanigans ought to know we’ve done a fair bit of work on remake the first and second stage to give them that extra umph. Check out the images below if you haven’t to see some of the changes if you haven’t been keeping up.

Out with the old and in with the new!

So as you can see some minor changes were applied so far to the first stage, as well as perhaps a title change to make it easier for players to remember, how exciting! But the second stage, Beehive Battleship, will see a bigger change with a completely relaid level map and the addition of a new gimmick that should see players blasting through the stage at uncontrollable speeds. But that’s not all I’ve got for you, I’ve also been hard at work on Xia-Yee’s shop and I think I’ve made some good progress on it. I wasn’t quite keen on what I showed off last Saturday so I decided to work on it further and I think you can agree with me the changes was worth it! 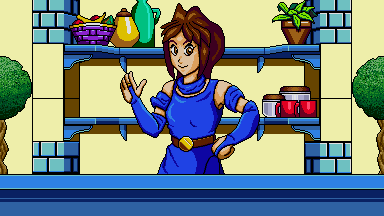 There’s still some more work left to be done, mainly filling in the shelves and providing some shading to the cream wells but I think the lighter colours combined with the change of perspective gives this a lot more of a homely vibe you want your local cafe to be like. As we role in 2018, the team here will love to be able to get Brock Crocodile almost ready to be out the door by the end of the year, so don’t worry, you won’t have to waita whole year for another update as we ramp up production this year.