A very chilly evening from London, hope everyone had a lovely weekend! In this update I’ll be sharing you some concept art of our latest creation, the new Princess Cassandra Honeypot and her mecha Beera! For those following the project for a while now will have noticed that originally, her mecha design lacked as much personality as we’re going for now. So first what we did between myself and artist is I would lay out some rough concepts so that Arq would get a feel of the sort of idea I had behind the redesign. 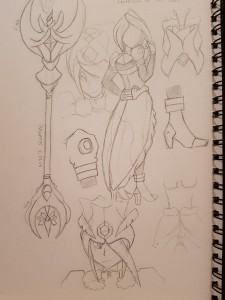 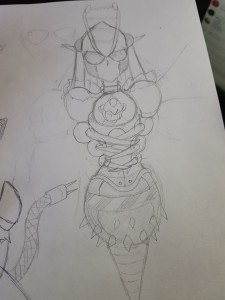 With the Cassandra I was trying to give her a more stylish and graceful design, being the young princess of the colony meant she should have a bit of flaire to her dress sense and tried to keep some of the bee motif going through the design. With the mecha unit, I wanted to retain some of that human design it had prior where Cassandra’s head itself was up top. Now with Cassandra piloting the mecha from the stomach, it allowed us to go with a larger head, give us a chance to add more flowing animations in regards to her twin tails that we’ll flutter against the wind. 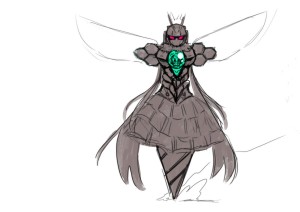 With that in mind, Arq went about drawing up a final piece of concept and with me giving the go ahead, the sprite was fleshed out (Which we’ll be sharing with a gameplay snippet of the boss fight soon enough!) and I think just from the sneakpeak above, you can agree with me the new design looks a lot cooler compared to what we had prior. To jog all your memories, have a look at the image below and compare it with the new art we released on Saturday! 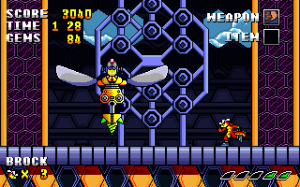 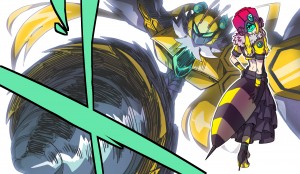 Whilst we kept certain ideas that I felt was essential to the desgin (Such as the drill and colour scheme) we’ve changed a lot so that players are left to enjoy a hopefully more enjoyable design! I can’t wait to share what the new sprite looks like in all it’s glory and I’m hoping long term admirers (And the recent influx of new fans we’ve gotten!) will be pleased with the result, until then, see you all next!