Prepare yourselves for a fight most fearsome… 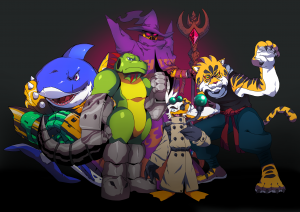 You’ve seen our heroes but let’s introduce you to the most sinister of foes, employed by the mysterious Wize, the Fearsome Four are here to cause trouble! You’ve already seen Wize and Eguanodon but now feast your eyes on the rest of the fiendish villains who’ll be trying to stop Brock on his adventure. Tijin is a martial arts master who’s spoiling for a fight and to prove his worth, Duckworth is a mad scientist who is absolutely quackers and Sharko is a softy with a scary appearance who’s fighting to support his family regardless of affiliation.

Just like with our heroes, I tried to create a combo of villains who look interesting on their own and assembled. You’ve got the deadly boss behind it all, the determined rival to one up the player and so on. I hope just like with our heroes, you think we’ve created an interesting group of individuals. Now head over to the character pages to give a read to find out more about these dastardly evil doers. Don’t worry though, we’ve got a few more characters to show off in future so stay tuned for more updates!